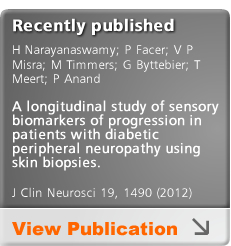 Professor Praveen Anand studied medicine at Cambridge University and received most of his postgraduate clinical training at the Royal Postgraduate Medical School at Hammersmith Hospital, London. In 1990 he was elected Senior Registrar in Neurology at the National Hospital for Neurology and Neurosurgery, Queen Square, and went on to become Senior Lecturer in Neurology for London Hospital Medical College in 1992. In 1997 he was appointed Head of Department and Reader in Neurology for the Academic Department of Neurology, at St Bartholomew's and the Royal London School of Medicine and Dentistry, for the University of London.

At present, Professor Anand is the Head of the Peripheral Neuropathy Unit based at Hammersmith Hospital, Imperial College London. The Unit focuses on molecular mechanisms in human neuropathies, with the aim of improving neuronal survival and regeneration, and preventing or treating chronic neuropathic pain. Collaborations with biotechnology and pharmaceutical companies are directed to bridge the gap between pre-clinical developments and successful clinical applications. The Unit has conducted 5 clinical trials for neuropathy in recent years.

Professor Anand has published over 140 peer reviewed publications and has co-authored a number of textbooks, contributing towards over 20 chapters relating to Neurological Disorders.

Some of Professor Anand's most important peer-reviewed publications include:

Anand P. The role of neuropeptides in the pathophysiology of the peripheral nervous system. MD thesis, Cambridge University, UK. 1984.