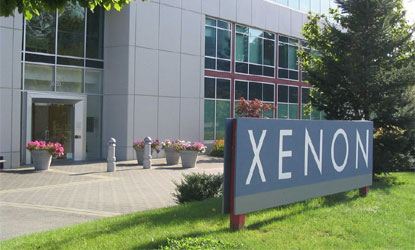 The trial met its primary and secondary efficacy endpoints with XEN1101 demonstrating a statistically significant and dose-dependent reduction from baseline in monthly focal seizure frequency when compared to placebo.

XEN1101 is being developed by Xenon for the treatment of epilepsy, major depressive disorder, and potentially other neurological disorders. Richmond Pharmacology was a key research partner during Phase I development, including first in human (FIH) studies, food effect and formulation comparisons. In particular, we conducted studies in collaboration with investigators at King’s College using transcranial magnetic stimulation (TMS) technics to evaluate the corticospinal and cortical activity profile of XEN1101 compared to placebo in healthy male volunteers. We have continued to follow XEN1101’s progression through its subsequent clinical development.

Dr. Christopher Kenney, Xenon’s Chief Medical Officer commented, “On behalf of the entire Xenon team, I wish to extend our thanks to the patients, investigators, and site coordinators who participated in the X-TOLE study. We have generated strong evidence that supports the efficacy, safety and tolerability of XEN1101 and depicts a highly favorable product profile for XEN1101.”

Dr. Jorg Taubel, Richmond Pharmacology CEO, stated, “We are delighted to see the progress of XEN1101 having conducted supporting research studies during the Phase I stage. The strength of these topline data suggest XEN1101 could play an important role in treating patients with focal epilepsy.

To learn more about the X-TOLE results, read the full news release here.